Fake news about China's Xinjiang Uyghur Autonomous Region, have increased remarkably in the recent months. On November 24, 2019, the media campaign that was launched simultaneously by 17 Western media outlets from 14 different countries, has given the signal flare. The international campaign, led by the New York Times, is being conducted with networks that are organized in many countries around the world. Turkey is the key country in this. The goal is to undermine good relations between Turkey and the People's Republic of China, forged after the President Erdogan's visit to Beijing last July.

In the last three months, misleading information about Xinjiang has been widely spread in the Turkish press. In addition to fake news published in newspapers and television channels, social media was the most important area of this smear campaign. Hundreds of fake images, portraying lives of Uighurs have been circulated through the social media. Fabricated videos and photographs claiming that torture, mass arrests and executions without trial are going on in Xinjiang, have been spread through certain social media accounts. The images turned out to be, not related to Xinjiang.

THE SOURCE IS FOREIGN

All the images, that are fabricated to support the claim of China's oppression and cultural annihilation of Uighurs, are made up. However, the "fake imagery production" is so extreme that, images and videos that are completely unrelated to Uighurs or even Xinjiang, are being circulated on social media. They even share the images of those who committed disgraceful crimes, such as frauds or women trafficking, under the headline, "Oppression of Uighurs".

Fake images are being served from abroad. The first propagations are made from the accounts of the people living in Western countries. The impression of an organized team, is given. 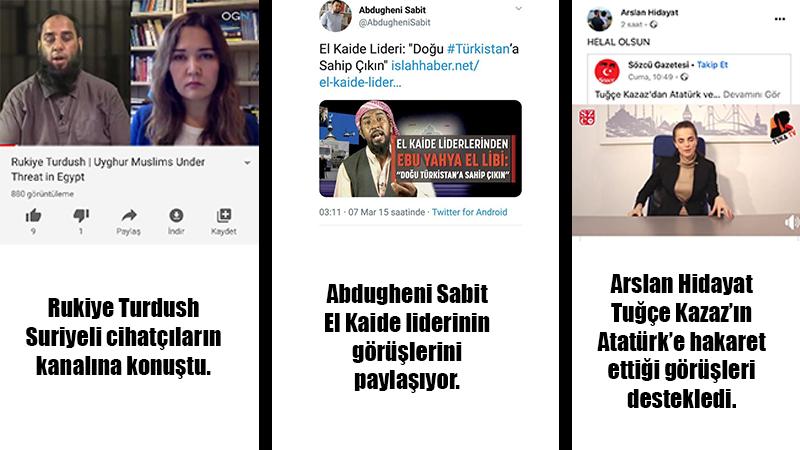 THEY ARE THE SAME NAMES

A member to the factory of lies, Abdugheni Sabit’s affiliations to ISIS-al-Qaeda is interesting. Sharing the al-Qaeda leader's call to "take care of East Turkestan" on his Twitter account, Sabit is also seen on his YouTube channel with ISIS fighters. On the YouTube channel "Talk East Turkestan", Sabit has uploaded a video including someone named Akif Razaq. Sabit’s dear guest, is a man who has been denationalized by the UK for his ISIS activities. 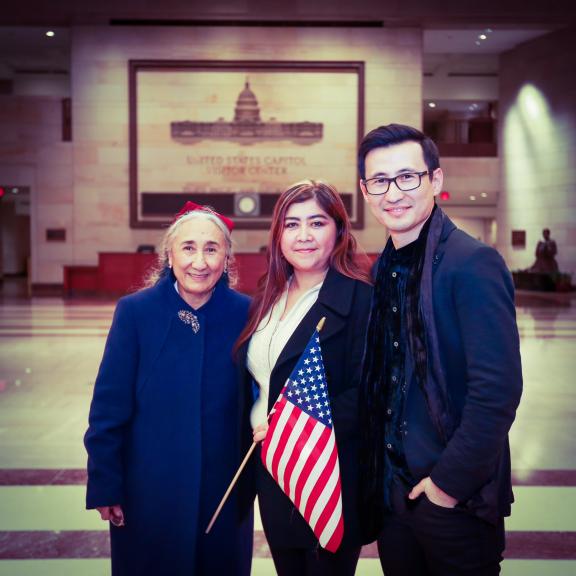 THEY ARE SAME NAMES OF THE SPREADERS IN TURKEY AS WELL

In Turkey, when we track them, who spread the posts on social media, always the same accounts appear. Mustafa Bag, who lives in France and is a reporter for Euronews, takes the lead. 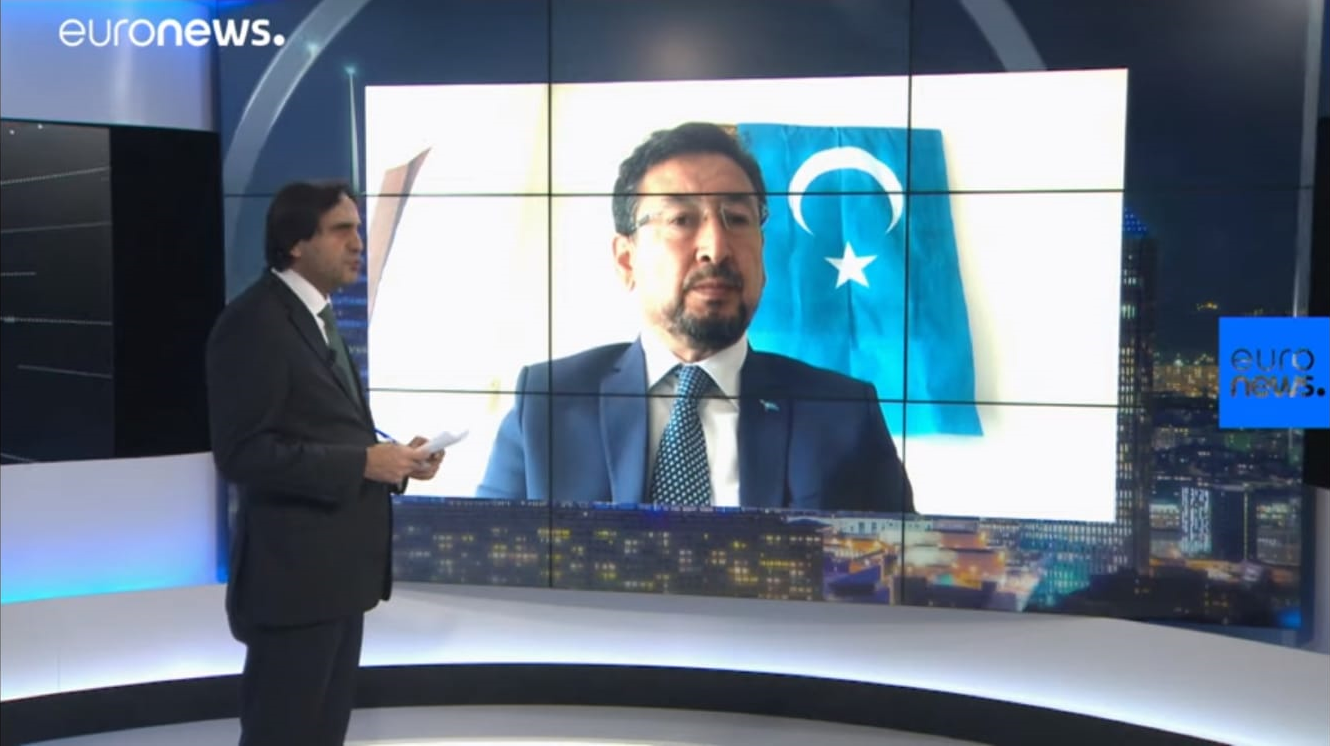 Mustafa Bag's name is seen in many news reports published on Euronews, but it is often noted that he has made many interviews from the so-called "President of the National Assembly of East Turkestan" Seyit Tumturk. Another active reporter is Batuhan Colak, editor-in-chief of the Yeniçag Newspaper's website. Uighur Seyit Tumturk, a henchman to the former World Uyghur Congress President Rebiya Kadeer in the United States, is one of the people who spreads these lies most. Another striking detail, is the large number of "troll" accounts that circulate these images. A significant part of these accounts are controlled by FETO.

We surveyed and investigated the most viewed fake videos and photos on the social media. Here are some examples:

On January 8, 2020, Mustafa Bag, Batuhan Colak and Seyit Tumturk, in a few hours apart shared a video that claimed Uighurs were sent to a "concentration camp".

However, neither the shared image was taken in the Xinjiang Uyghur Autonomous Region, nor the people arrested were Uighurs. The footage is from the case of block chain virtual currency fraud, which 72 suspects are involved and were sent from Shanghai back to Taiyuan, the capital of Shanxi Province. The victim of the case is more than 300, and the total amount of the fraud is over 300 million RMB (around 44 million USD). From 17th to 21st of December, the police sent different teams to regions involved to launch the arrest. Up to today, all of the 72 suspects have been held in detention for crimes. 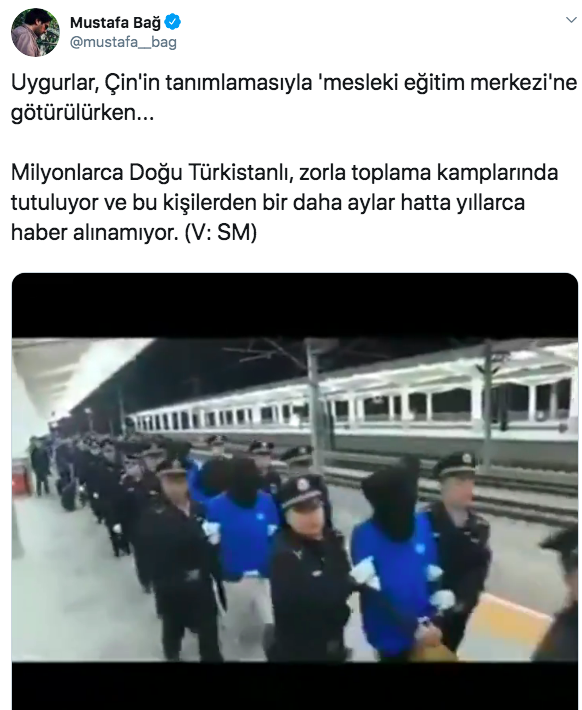 AN INDONESIAN SOLDIER IS SHOWN AS CHINESE

A key figure sharing the 2019 video, which is headlined as "Uighur citizens being beaten naked by Chinese police," is the IYI Party Group Vice President Lutfu Turkkan.

Turkkan reacted to China in his post, and said to those who did not oppose it, "May the wrath of God be upon you." However, Turkkan's post was also a lie. The video has been found, let being unrelated to Xinjiang alone, but also unrelated to China at all. When the video is watched carefully, a semi naked man can be heard saying “Ampun pak”, which means “Have mercy” in Indonesian language. The video footage was widely shared on social media in Indonesia in May 2017, for example here on the liveleak.com website with a caption saying: “Thief beaten by military soldier in Indonesia! I understood that was a pickpocket thief, who deserve justice.” Again, a report in the Tribun Jateng newspaper published on May 24, 2017 on the video was headlined: “The facts behind the beating of a pickpocket by an Indonesian military officer.” The article says that the man in the video was a military officer who had beaten a suspected thief, allegedly at a railway station in the capital Jakarta. A July 10, 2017 video posted on YouTube, which has been viewed more than 60,000 times, shares the same footage of the semi naked man being beaten in a room with a caption saying: “A thief caught by a member of the TNI .. ??” TNI refers to the Indonesian army. Despite the fact that the truth has been revealed, it is seen that Lutfu Turkkan has still not deleted the post.

THE LIE OF UIGHURS' MOUTHS AND EYES ARE SEWN SHUT

One of the most widely-spread images in 2019, was a photograph claiming that Uighur’s eyes and lips are being sewn shut. This post, spread by Muhammad Saeed, has nothing to do with Uighurs again. The image used on the social media belongs to the Iranian poet, Emin Abbas. Abbas, reacts on Iran's ban on Kurdish poetry, by sewing his eyes and mouth shut in May 25, 2003, as reported by many Turkish news agencies. 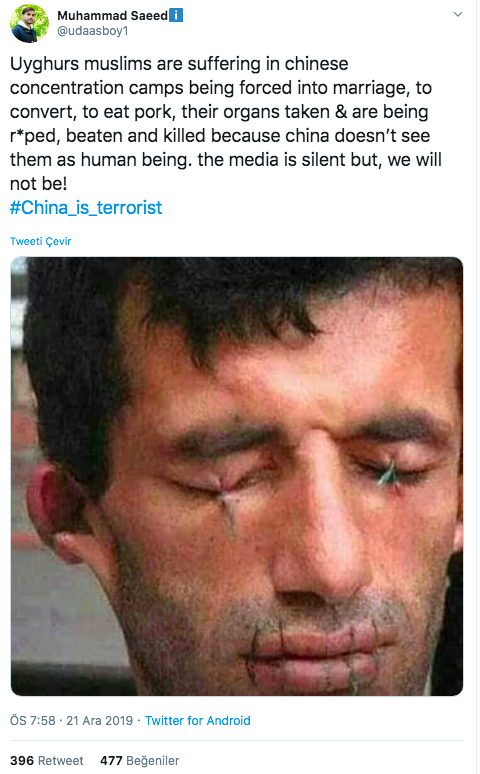 By Abdulgheni Sabit, who lives in Amsterdam, it has been claimed that " Uighur Muslim men under the Chinese Administration, are forced to wash women's feet, during the international women's day, in training camps, ". These photos, which turned out to be unrelated with Xinjiang, are found in a March 6, 2010 report on the China Daily website: "Central China's Hubei Province, March 5th, 2010. Officials at Fanjiatai Prison have organized an event, to better communicate between prisoners and their families, ahead of March 8th International Women's Day," the report stated. 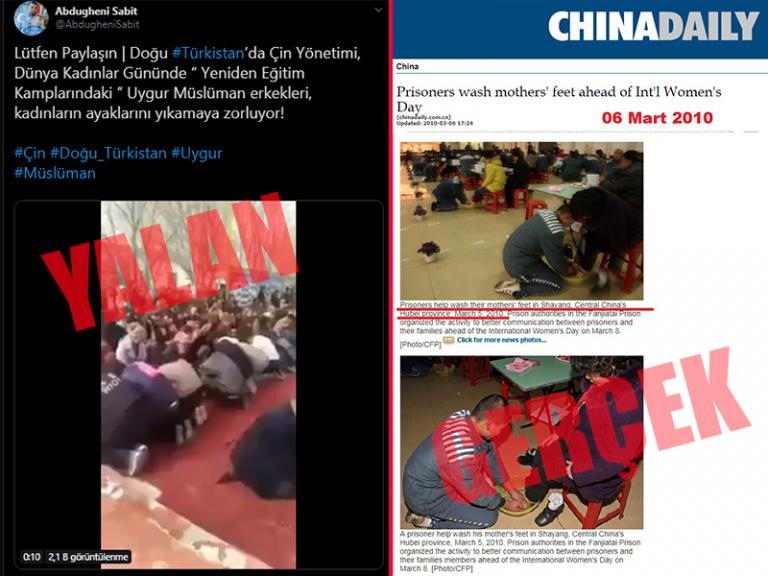 THE MASS EXECUTION IS NOT IN CHINA

In the photo, which was shared by the account Fahri Uygur and was circulated on the social media, shows a mass execution. The image is not from China, but in Indonesia. 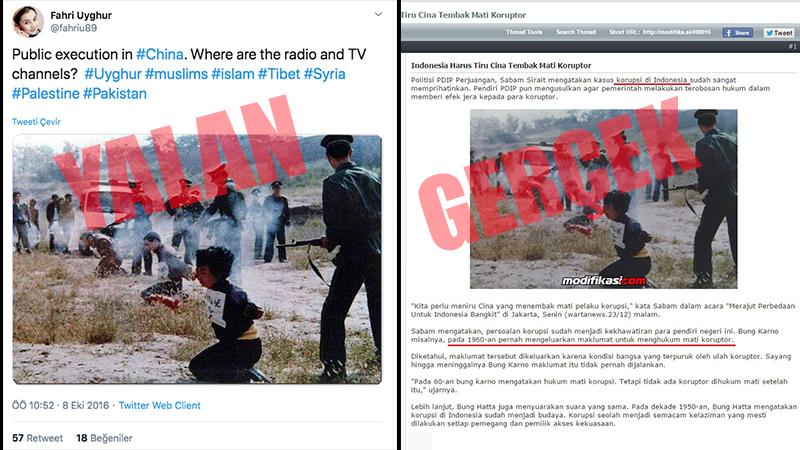 An account on the social media called Sakalar Iskitler, claims that 3,114 Uighur citizens were executed on December 1, 2019. However, neither the death penalty is real nor the ones on the trial are innocent citizens. Here's the truth: On the morning of May 31st, the sports square of the city of Hotan, in Xinjiang Uyghur Autonomous Region, a "public detention and custody gathering" to crack down on violent terrorist acts and arrest some violent terrorist criminals by law, was organized. More than 1,000 staff and people from various districts, neighborhoods and municipalities attended the "public detention gathering".

With the indictment bill which was filed by the Hotan City Prosecutor's Office at the meeting, 21 suspects were charged "for national hatred, national discrimination, disruption of the social order, bigamy and other constitutional crimes" and were arrested by the Hotan City Public Safety Bureau for "inciting national discrimination and posing a threat to the national security". The local governor Adil Nurmedi, has stressed the importance and urgency of taking measures against the activities of the violent terrorists in the city, once again in his speech. 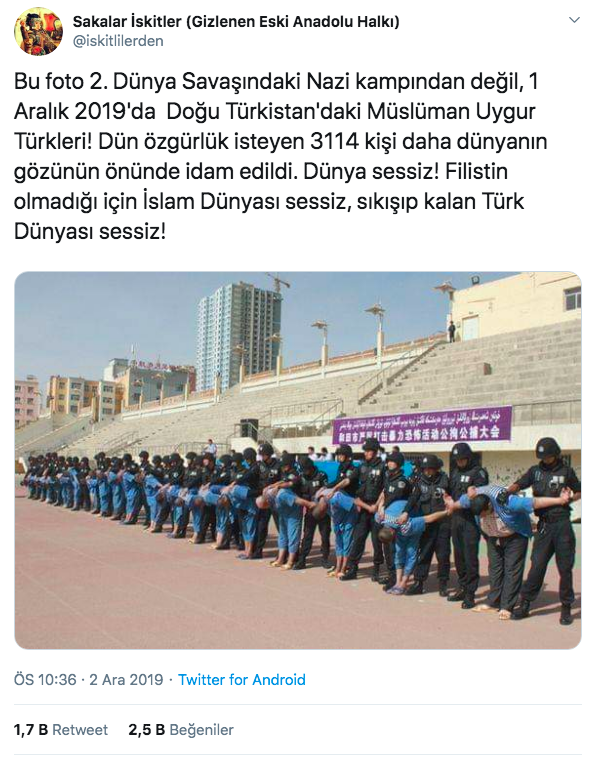